In the recent issue of Golf magazine Daniel Berger talks about drills that helped his career:

I Learned A Powerful Truth

“My game took off after I learned a powerful truth: Hitting 20 smart practice shots helps a lot more than mindlessly banging range balls.

You don’t need to hit dozens of shots. Me? I practice one stock pitch. I use the same club (my lob wedge) and make the same overall motion, which gives me consistent height, trajectory and spin. The only variable I tinker with is landing area. For, say, a 20-yard pitch, I pick a spot six yards from the hole – that’s where I want the ball to land. I let roll do the rest. If I’m 30 yards out, I’ll land the ball eight yards from the hole. The trick is to let your body and swing “react ” to different landing spots while keeping everything else the same. (It’s about instinct).” – Daniel Berger 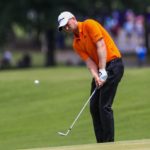 Get good with one club in your short-game practice. The fewer the variables, the easier it is to pull off quality shots under pressure.